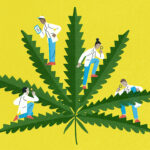 There is this common misconception about medical marijuana – if inhaled, detrimental effects will be on the patient’s lungs. However, according to a 2012 study published in the Journal of the American Medical Association (JAMA), this notion is not true; and in contrary, medical marijuana might improve lung health under certain conditions.

Most people are aware that marijuana is the most widely used illicit drug in the world, and it is the second most smoked substance, after tobacco. For years, recreational use of cannabis (‘weed’, ‘dope’, ‘grass’, ‘spliff’, ‘toke’, ‘hash’, ‘hemp’, ‘bud’, ‘ganja’ and many others) has had increasing media attention and, with legislation laws in different countries being relaxed, it is a no wonder that there’s a wider exposure to it – plus high records of individuals are purchasing marijuana seeds too!

Like tobacco smoke, marijuana smoke is said to be irritant to the throat and lungs and can cause a heavy cough during use. We still know very little about the long-term effects of smoking cannabis on the respiratory system and on health in general, and since cannabis also contain levels of volatile chemicals and tar that are similar to tobacco smoke, it is raising concerns about risk for cancer and lung disease – some says.

Cannabis comes from a flowering plant, native to central Asia and the Indian sub-continent. The genus includes three different species—Cannabis sativa, Cannabis indica and Cannabis ruderalis. They produce two major active compounds, delta-9-tetrahydrocannabinol (d-9-THC) and cannabidiol (CBD); however, they contain 60 cannabinoids and over 400 compounds in total. THC is the psychoactive compound, but it is modulated by CBD.

The smoke from marijuana and tobacco contains many of the same substances, including toxic gases and tar, that’s why health experts have suspected that the risk of developing chronic obstructive pulmonary disease (COPD) from smoking marijuana might be similar to that of smoking tobacco. However, the results of earlier studies on pot smoking yielded puzzling results; many short-term studies demonstrated that there was no evidence that lung function is decreased when inhaling a pot.

A study design gave researchers a chance to observe the effects of marijuana use over two decades. During five different medical exams — at the start of the study and two, five, 10, and 20 years later — participants were asked about their lifestyles, including tobacco and marijuana use. They were also given tests that measured how well their lungs functioned.

Both Marijuana and tobacco use will require controlled clinical trials. As of today, study offers some assurance to people with chronic medical conditions who use pot in moderation for pain relief or appetite stimulation. If marijuana is the only thing they are smoking, they aren’t likely to add COPD. Estimates of the exposure to marijuana were inexact. It substantially varies in size and potency. The data from CARDIA (Coronary Artery Risk Development in Young Adults) didn’t distinguish between smoking marijuana in joints, by pipe, or with a bong (water pipe). Heavy use might defeat your purpose to clear lung capacity, so always hit in moderation.

How to Find the Road to Addiction Rehab and Recovery?

X Foods To Avoid That May Cause Distressing Migraines

Discover The True Definition Of Addiction

What is Psychodynamic Therapy?